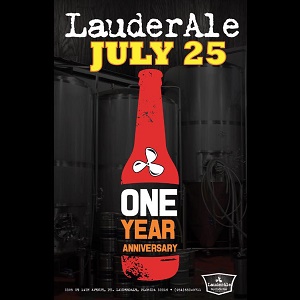 Hard to believe but LauderAle has surpassed it’s first year in business and is throwing a party to celebrate their One Year Anniversary with Live Music, Food Trucks and lots of BEER!  The event takes place  on Saturday, July 25th from Noon till Midnight with live music beginning an 2pm.

“Without beer drinkers we would be nothing!”

Enjoy..
*TOURS Learn the history of LauderAle
*Drink some of our SPECIAL BEER RELEASES
*Join our MUG CLUB to be an exclusive LauderAle beer drinker!

Fort Lauderdale’s First & Only Nano Brewery, LauderAle is a small batch, electric fired brewery located just outside of Port Everglades in Fort Lauderdale, Florida. Founded by natives, LauderAle prides itself in cultivating authentic ales centered around local culture and influence. LauderAle’s beers range in a wide variety of rotating styles from Blondes to Imperial Stouts along with seasonal’s and special releases. Several guest taps from other local Florida breweries are also on tap.