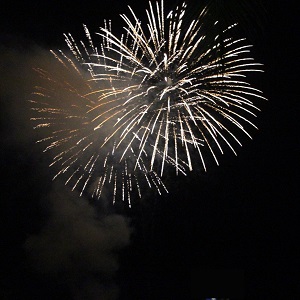 In honor of Independence Day,  the City of Margate and the Margate Community Redevelopment Agency are hosting their annual Fourth of July Parade and Fireworks Celebration on Saturday, July 4th. The festivities will begin at 9 a.m. with a parade followed by a picnic and an evening concert. The celebration culminates with a spectacular fireworks show at 9 p.m. on the corner of Margate Boulevard and 441.

With more than 70 parade entries each year, the City of Margate’s 4th of July Parade is sure to be a huge hit! It’s become an annual tradition for many families, who line the parade route in red, white and blue apparel. This year’s parade theme is “1955: Celebrate 60!” in honor of the City’s 60th anniversary.

Beginning at 9:00 a.m., decorated floats, marching bands, community groups, vehicles and much more will parade down Margate Boulevard eastbound from 76th Avenue to Margate City Hall. Awards will be given to a private business, non-profit organization and a Margate family. Immediately following the parade, the Margate Community Redevelopment Agency will provide post-parade refreshments and bounce houses at City Hall.

Calypso Cove – the City’s waterpark featuring a plunge pool, a swimming pool and a zero-depth activity pool with water spraying animals, palm trees with tipping coconuts and a play structure – will be open from 10:00 a.m. to 5:00 p.m. Fourth of July activities include live music by a steel drum band and face painting for the children. Admission to Calypso Cove is $4 for Margate residents and $7 for non-residents.

Come out early for an old fashioned 4th of July extravaganza. The festivities begin at 5:00 p.m. with food, bounce houses, and a chicken wing cook-off at the corner of Margate Boulevard and 441 (northwest corner).

The Valerie Tyson Band, one of South Florida’s best dance, Top-40 and R&B bands will take the stage at 6:00 p.m. and the fireworks display will begin at 9:00 p.m.

To enter the chicken wing cook-off contest, please contact the Parks and Recreation Department at (954) 972-6458.

Food Trucks Confirmed for this Event

For more information about the City of Margate’s 4th of July celebration, please contact the Parks and Recreation Department at (954) 972-6458. 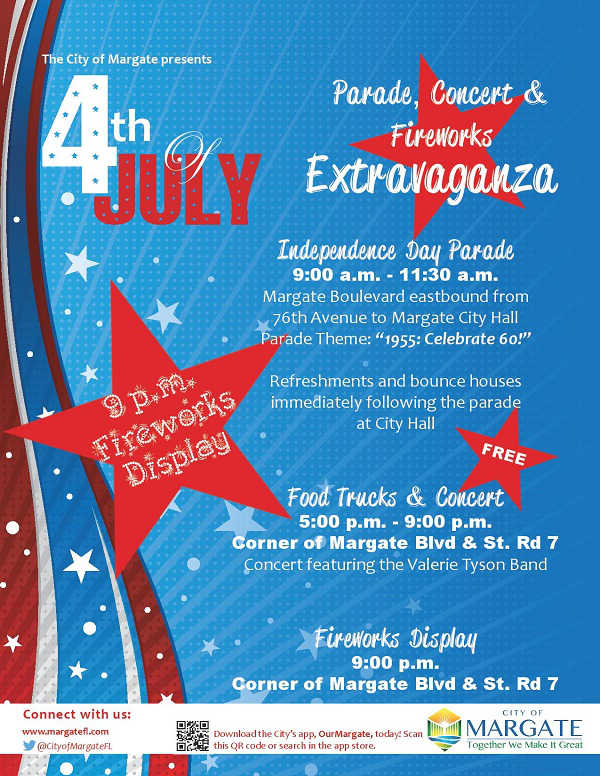